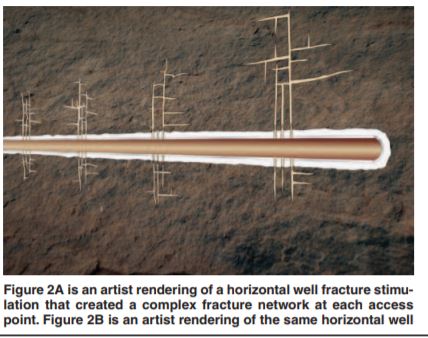 Refracturing often is considered the best option for combatting production declines in unconventional reservoirs. Decline rates from SRR wells usually are more rapid than wells in conventional reservoirs because of their ultralow permeability, limited reservoir contact, and the original completion strategy.

The success or failure of refracturing can have implications for field development.
The desire to reinvigorate wells by performing secondary or tertiary hydraulic fracture stimulation treatments has been present for many years. The need for improving production above the economic break-even point and tapping additional portions of the reservoir are lofty goals that have proven difficult,
if not impossible, to achieve in conventional reservoirs.

Restimulations are appealing because treatments involve reusing the existing wellbore, which potentially provides a  cost savings of $1 million-$4 million,compared with drilling a new well. Well costs outside of North America are 5-10 times greater, making refracturing a reservoir even more enticing. Reusing a wellbore also can reduce environmental impact dramatically, compared with drilling and completing a new well in a different location. Additionally, permitting issues, pad construction, rig moves, pipelines, and several other operational
issues can be eliminated when an existing wellbore can be reused.

HOUSTON–Source rock reservoirs (SRRs), which often are called shale reservoirs, have unique attributes that make refracturing a viable option when production rates drop below economic limits. The ability to successfully refrac SRRs provides the potential to extend the life of the “shale revolution” beyond the normal 20-30 year productive life of a reservoir. Hydraulic fracturing of oil and gas reservoirs has been an accepted technique for enhancing production since its commercial introduction in 1949, and plays a major role in developing many oil and gas fields globally. The combination of fracturing technology and horizontal drilling has made exploiting SRRs a thriving endeavor in North America.

Trudeau to Advance Pipeline after fierce backlash from Oil sector

Liberty Frac Stock is another oilfield service company losing with the...