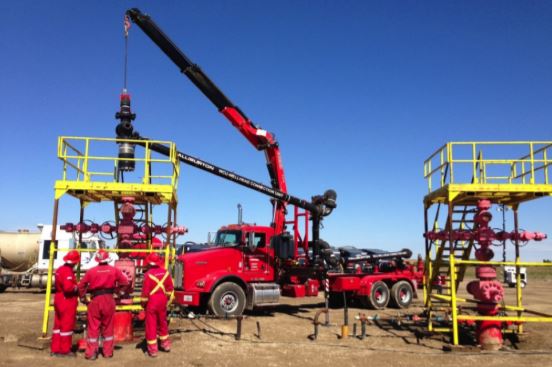 OVERVIEW
Operations at the wellsite have become increasingly complex with high treatment
rates, multiple wells on a pad, and large amounts of equipment on location. This often leads to complex rig-ups with large amounts of iron rigged up to each wellhead. With multiple wellhead pads, zipper manifolds are often utilized to facilitate reduced cycle times between stages. However, these zipper manifolds add significant additional cost, equipment, and complexity to operations. The
Halliburton ExpressKinect™ Wellhead Connection Unit (WCU) drastically reduces rig-up time and complexity, resulting in a more efficient, safer rig-up operation.

REDUCED COMPLEXITY, IMPROVED EFFICIENCY
With the increase in multi-well fracturing operations, there has been a significant increase in nonproductive time due to labor-intensive and complicated rig-up requirements. In addition, this complexity has increased cycle times between wells. In cases where zipper manifolds are utilized, the operational complexity and increased cost are realized. The improvements in cycle times are frequently offset
by scheduled and unscheduled maintenance required on the zipper manifold, often resulting in nonproductive time and a reduction in onsite efficiencies.

Another practical use is in the winter, as shown above.  Without the need for a zipper and all those down-joints that come with them,  the frac hands will spend less time exposed to the elements during rigging up and rigging down during the harsh North Dakota Winters.

Oilfield workers are turning to Clean energy for Jobs

Plugging up old oil wells. Why don’t we fix this?